Vallanca has a long cultural tradition thanks to its Fiestas in honor of the Virgin of Santerón that are held every 7 years from September 16 to 26. Where the municipality becomes the spiritual and festive capital of the lands of Rincón de Ademuz.
The Virgin of Santerón, much loved and revered in this town, according to oral tradition, says that a shepherd from Vallanca appeared in the municipality of Algarra in 1215. And it has been celebrated without interruption since 1719 when a great drought occurred , every seven years the Image is transferred from the hermitage of the Valley that bears his name and remains in the town for eleven days in which Vallanca adorns its streets in a special way, with arches made of juniper fences, which give a special perfume In the plaza, instead of an arch, a canopy is arranged at the main door of the Church with the mission of welcoming and crowning the Virgin in the plaza.
The next septenary will be in 2019 where the 43rd Edition will be held.

The Bonfires of San Antón are celebrated annually on January 17, where all the people in neighborhoods light their bonfire, and share meals, a porridge contest and anecdotes among the neighbors, waiting for the Vallanquero parade that, animated by music, composes chascarrillos for the neighbors .
Fiestas de San Roque on August 16 with different activities for all ages.

Visit the municipality where you will find the hermitage of San Roque.
The hocino cave where the town is located and visit its corners where you will discover its cultural heritage.

Images of the cultural historical environment: 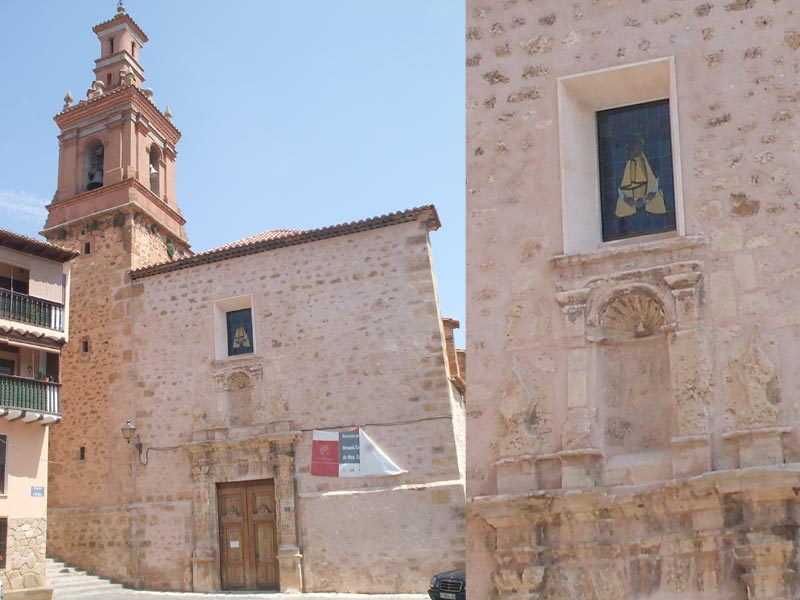 Parish Church of Nuestra Señora de los Ángeles : The parish of Vallanca is among the oldest in Rincón de Ademuz, documenting its dementia as early as the first third of the 13th century. However, the parish church that we can see today, which came to replace the old one, took its final appearance at the end of the 17th century. It is a baroque building that has a longitudinal plan, with a wide central nave and six interconnected side chapels. The most outstanding feature of its interior is the use of the decoration in sgraffito, whose motifs are characteristic of the last decade of the 17th century and are made in white on a black background. Although present in other regional temples, the sgraffitoes of the parish church of Vallanca develop with special amplitude and perfection and are, without a doubt, the best preserved in that local area.

Hermitage of San Roque: Originally erected under the title of the Holy Trinity, its construction took place during the first third of the 17th century. The plant in the form of a Latin cross. From the outside, its doorway stands out, consisting of a simple semicircular arch with wide segments, as well as the numerous carved crosses inserted in the walls, four of which allude to its original Trinitarian dedication. The pilgrimage that takes place on August 16 is famous, with a large influx of faithful.

Parish Church of San Antonio de Padua: Located in Negrón, Vallanca village. Century XVIII. The structure of the building is of a Franciscan simplicity: rectangular plan, divided into three sections that constitute the main chapel, body and choir. From 1868 the hermitage of Negrón acquired the rank of parish church, served by a rector.

Mill of the Villa: Its construction was carried out at the end of the 16th century, instigated by two residents of Vallanca. Although at first it had the opposition of the municipality of Ademuz, which then had the right to install furnaces and mills in its municipal area, the Vallanca mill was finally erected and on its façade there is the shield that distinguished the municipal buildings of the Ademuceras , the four bars in losange and crowned of the House of Aragon.

Abbey House: Building from the late 16th century, recently demolished. A new building has been erected on its site. The family shield of the parish priest who ordered it built is still preserved.

Pósito House: Old municipal grain warehouse, it is a building that dates back to the 18th century.

Popular architecture: The town of Vallanca has numerous charming corners. A good number of houses still show their original appearance, with vernacular construction techniques, which are among the best in Rincón de Ademuz.

As for the buildings in the rural area of the dry land in Vallanquero, the following stands out: the Josezón barrack, a dry stone construction, paradigm of those existing in various parts of the Rincón de Ademuz; both for its tectonic complexity and for its formal beauty, it should be listed and inventoried -European Heritage Inventory (IPCE) -, including among the most unique local monuments, as its architectural value makes it universal. These buildings connect with protohistoric and Celtic tradition constructions, and were erected as a refuge for farmers and shepherds in different historical moments of the cattle-forest and agricultural expansion of the region.

HOLIDAYS:
• On the Friday closest to January 17, Saint Anthony’s Day, bonfires are lit in each neighborhood where the neighbors gather to celebrate the saint’s festivity.

• On August 2 is the feast of Our Lady of the Angels, patron saint of the municipality.

• It celebrates its patron saint festivities around August 16, in honor of its patron Saint Roque.

• Pilgrimage of Santerón. This party is related to the Santeronera devotion. An annual pilgrimage is held to the Sanctuary of Cuenca in Santerón, where people from both sides of the Castilian-Valencian border congregate. Pentecost Saturday is celebrated in the sanctuary with mass, procession of the Virgin, typical foods, market, dances to the sound of the pita and the box (tabal and dolçaina), etc. The showy horse runs through the Santerón meadow are remarkable.

• Every seven years from September 16 to 26 the Septenario de Nuestra Señora de Santerón is celebrated. The Virgin is lowered on her shoulders, from her hermitage located in the Algarra area (Cuenca) to the Villa de Vallanca. During the following nine days the so-called Fat Parties take place, in which Vallanca becomes the spiritual and festive capital of the lands of Rincón de Ademuz. The seventh XLI of the Marian celebration took place between September 16 and 26, 2005, and the next one, which will be XLII, should take place in 2012.

• On June 17, the feast of its patron, San Antonio de Padua, is celebrated in the village of Negrón.

• Vallanca also has a rich popular musical tradition, unique in the region. The expert bagpiper vallanqueros were once demanded in all the parties of the Rincón de Ademuz to encourage dances, solemnize processions and intervene in any festive act. The music of the performers of the pita and the box of Vallanca – local names of the dulzaina and the tamboril of the Valencian-speaking areas – has been recently collected and published in a recording.